Posted at 20:47h in Creepypasta by ZetaSephin 0 Comments
0 Likes
The Script
The Script

In November 16, 1982, an SUV was found in the middle of the desolate Wyoming prairie, its doors open, the engine running, and clothes scattered all over the highway. The owner of the car, 35-year old Don Kemp, was nowhere in sight.

Four years after he disappeared, Don’s body was found just a few miles from where his Blazer was abandoned. The sheriff believed Don froze to death in a blizzard three days after he was lost. But Don’s mother, Mary Kemp, is not convinced: 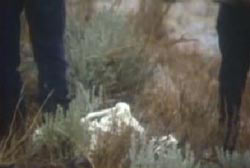 Don Kemp was a promising young advertising executive in New York City until he was severely disabled in a traffic accident. After he recovered, his sister, Kathy Dobe, said that he chose not to return to Madison Avenue:

“He had become disillusioned a bit with materialism. Don loved the good life and New York was the epitome of that. And I think he wanted a simpler time and a quieter time, and I think that’s what drew him to that area.”

In September 1982, Don sold almost everything he owned and began a long drive West. His destination was Jackson Hole, Wyoming, where he planned to write a book about Abraham Lincoln’s assassination. The day before he disappeared, Don was seen at a museum in Cheyenne. He wandered through the small galleries for two hours, speaking to no one. When he left, Don apparently forgot his attaché case. In it were his traveler’s checks, diaries, and his driving glasses.

The next day, November 16, l982, at 10AM, highway patrolman Randy Teeters came upon an eerie sight. Don’s abandoned car, in the middle of nowhere:

“Neither of us had seen anything like this. The vehicle was left forty miles from any town, on an off ramp, running, stuff strung out of it, the doors open, a relatively new vehicle, not one that someone would just leave.” 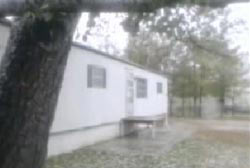 Who made the calls from the trailer?

When he found the car, Patrolman Teeters noticed a single set of footprints leading from the roadside into the empty, lonely prairie:

The local sheriff’s department concluded that Don had wandered off alone. But Don’s mother believed he was abducted:

“I was certain he was in a horrible jam. I just felt it, because this was so unlike my son. I knew that he hadn’t walked out there. I feel that he didn’t, and yet the sheriff kept saying that he was out there.”

“Well, I think he was disturbed, he was having mental problems and possibly some health problems, and he just couldn’t cope with it.”

Deputy Rod Johnson flew over the area for two hours. He could see for miles over the open terrain. But he said there was no trace of Don:

“I felt the guy was disorientated, and I felt that he didn’t want to be found. If he would’ve wanted to be found, he would have heard the aircraft, could have waved his arms, got our attention, gone up to a ridge, anywhere, and been sighted.”

Later that day, Johnson and two other deputies found a duffle bag lying near the single set of footprints. In it were laundry soap, clothes, and a teapot, all belonging to Don.
Don’s mother doubted he placed the bag there:

“I believe it was put there to make it look like my son had walked out there. And I don’t believe my son did.”

Tracks in the snow led searchers to a barn six miles from the highway. Inside was a pile of sticks arranged to start a fire, and three of Don’s socks. Three days after he disappeared, a blizzard made it impossible to continue the search.

Three years later, a group of hunters discovered Don’s remains just a few miles from where his SUV was abandoned. According to Sheriff Ogburn, an autopsy showed no signs of foul play:

“We never did suspect foul play. He was out there, and was avoiding us, stayed away from us, and I believe on the second or third day, he was gonna try to get back to his vehicle and he didn’t make it.”

This is where the case of Don Kemp should have ended. But Mary Kemp has been haunted by two clues that just don’t fit: a sighting of Don and a number of mysterious phone calls.

Five months after Don supposedly died in the blizzard, he was seen 150 miles away in Casper, Wyoming. Not once, but twice. He was reported to be at a traveling exhibit of Abraham Lincoln memorabilia and at a local tavern. Mary Kemp talked to a bartender who distinctly remembered serving Don.

There were other clues that pointed to the town of Casper. Around that time, one of Don’s closest friends returned home from vacation. On her answering machine, she found six different telephone messages from Don. She asked that her identity not be revealed:

“I’m absolutely certain that it was his voice. And it was a very brief message, ‘I’d like to speak to you again, call me,” and a phone number. The next day I called, asked to speak to Don. A man answered the phone and said that Don was out. I’m convinced he holds the clue to what really happened to Don.”

Telephone records prove that the calls were made from a trailer in Casper, Wyoming. The young man who was renting the trailer at the time said the phone company must have made a mistake. Capt. Mark Benton of the Natrona County Sheriff’s Department interviewed him several times:

Unsatisfied by the man’s story, Mary went to Wyoming to conduct her own investigation:

“God knows what happened to my son in that trailer. It’s too horrible to contemplate. I don’t know. But I think I deserve an answer. I tried in every way I knew how to contact this young man. I finally spoke with him only one time on the phone. I asked him about my son, and he said he knew nothing about Don Kemp. He just paid those phone bills, he didn’t look at them. And I told this young man he was lying. ‘You know what has happened to my son.’ And he just hung up on me.”

Three weeks after he was questioned, the young man moved out of the trailer and left Casper. Capt. Mark Benton:

“In all three times that I spoke with him, he was always very cooperative. And I have no reason to feel that the individual here in Casper had any knowledge of this man even being in Wyoming, other than these phone calls, and I don’t have an explanation for it and neither did he.”

“Who made the phone calls? That’s the big question, who it was. It had to have been my son.”

So what really did happen to Don Kemp in the vast Wyoming prairie? Sheriff Ogburn thinks he died in the blizzard, but can’t explain the phone calls. Mary believes Don was abducted, taken to Casper, and murdered. But then, why was his body found just three miles from his abandoned Blazer? His death remains a mystery.